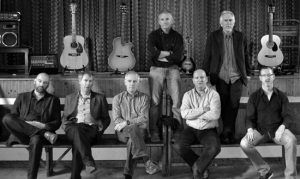 Mayo based group “Coda” are set to perform at Scoil Acla 2018!

This local, all-male, seven-strong group have become something of a phenomenon nationwide as the richly-harmonised approach to vocal performance reaches an ever-growing audience.
Formed in 2011 from Cór Mhaigh Eo members, Coda revel in experimenting with their voices and an eclectic mix of musical styles, including Celtic and North American music, traditional and contemporary folk songs and original compositions. Popular songs from sources as diverse as Clannad, Tom Waits, Van Morrison and The Beatles get the special Coda treatment too. The group’s repertoire comprises both a capella arrangements and songs with instrumental accompaniment (guitar, mandolin, banjo, whistle, flute, fiddle) as well as traditional Irish music.

Dr Brian Lennon, perhaps the best known, is a member of the Lennon family from Leitrim, who are soaked in traditional Irish music. Declan Askin, a teacher by profession, is making a name for himself as a songwriter of note. Perhaps less known is that fellow group member Conal O’Domhnaill’s illustrious siblings include Maireád and Tríona Ní Dhomhnaill and Mícheál O’Domhnaill of the legendary group, The Bothy Band.
Coda has performed many concerts around Ireland and on national TV and radio. They played in Spain in 2014, and in at the Temple Bar Tradfest in Dublin in 2015. They have released one successful CD, ‘Mouthmusic’, and ‘Train of Spirits’ released in December of last year.

The concert will take place in Óstán Oileán Acla (Alices) on Saturday 28th July, Doors open at 8.30pm. Why not kick off Scoil Acla week in style!? Tickets will be available online & locally soon – stay tuned.

Due to huge demand for our 2018 Summer School (28th July-4th August) and the pressure on our system, we’ve decided to extend the Early Bird Offer for one more week! Up to Midnight on Bank Holiday Monday will be your last chance to avail of the offer by using the code CEOL18