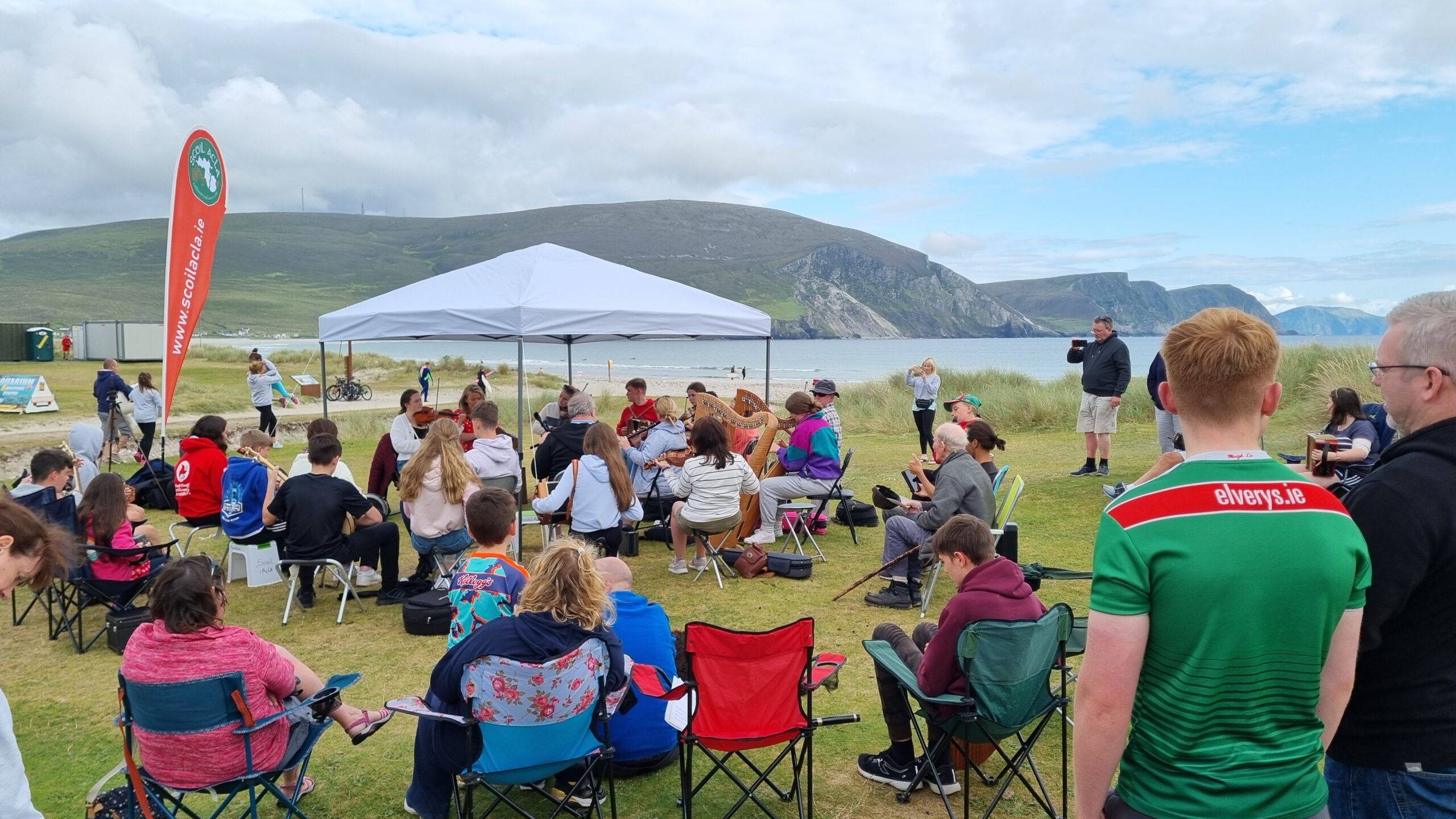 “Zoom” Classes took place across a number of different instruments and the committee was delighted to receive support from tutors who return to Achill year after year and very much appreciate their efforts in ensuring the “Zoom Classes” were as engaging as possible for all the participants.

The in-person Writers Workshop was conducted by Paddy Bushe and provided a forum for established writers to share their experiences & expertise and for beginners to take their first steps. The coiste wishes to thank Sarah Lavelle from the Keel Hall Community Centre for all her assistance during the week.

Pre-recorded Concerts during the week included the Traditional Music Recital and Ceolchoirm na Féile which were both streamed on our Facebook page – viewers were treated to some wonderful music, singing and dancing by musicians of the highest calibre. The annual Hata Acla Competition was also staged virtually and attracted entries from throughout the country. It was won by a talented group from Kerry “Draíocht Deartháireachta” and the committee looks forward to welcoming them to next year’s Scoil Samhraidh.

A series of historical walks with some local historians & guides took place throughout the week featuring Kildownet, The Deserted Village, the “Paul Henry Trail” from Dooagh Beach to Gobelennaun and the Dooagh Loop Walk. Thanks to Tomás Mac Sheáin, Gerard Mangan, Tomás MacLochlainn and JJ McNamara for sharing their wealth of knowledge chomh maith le Gaeilg’ Acla with everyone.

A novel event reflective of the Covid-19 restrictions were the popular “Trad ar an Trá” sessions – outdoor sessions held on Keel and Dugort Beaches. The sessions were led by our local tutors who were joined by many visitors from the young to the not-so-young! It was great to hear “live music” once again.

A poignant, wreath-laying ceremony was held at the grave of Lieutenant Michael Moran in Slievemore Cemetery in memory of all those who fought in the War of Independence. Michael’s nephew spoke movingly of his Uncle, noting the connection between him and the founders of Scoil Acla. Michael will shortly publish a book about his Uncle. A word of thanks to Michael Lavelle for playing the bagpipes and to all who attended.

The Scoil Samhraidh was brought to a close with the Aeraíocht at Lourdie’s on Saturday. The weather was favourable as John Twin McNamara and Paddy Ryan raised the Scoil Acla Flag. Music was provided by locally-based tutors and a very enjoyable afternoon was had by all.

Coiste Scoil Acla would like to thank their tutors, artists, volunteers, supporters and all who participated in any way in our Scoil Samhraidh. A word of thanks to Róisín Lavelle for taking care of photography at the various live events. Coiste Scoil Acla wishes to thank their funding agencies – the Arts Council, Ealaín na Gaeltachta, Music Network & Mayo County Council and to Councillor Paul McNamara – for their continued support.

The dates for 2022 are the 24th to the 30th July and the committee is hoping for a resumption of their summer school as normal. Online booking with an “Early Bird Discount” opens in April 2022.