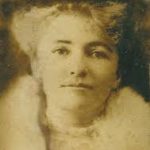 Eva O’Flaherty grew up amid the Georgian splendour of Lisdonagh House, on the shores of Lough Hacket in Caherlistane, Co Galway but her home became the remote Achill Island. She was a very influential and well educated lady with deep passion for all things Irish and cultural.

Unlike the other founder members of Scoil Acla, Miss O’Flaherty remained on the island. The Scoil Acla Hall built by Mrs Weddall was given to Eva and she established the St. Colmans Knitting Industry in Dooagh. From its inception in around 1912, St Colman’s quickly developed an extensive clientele from all over Ireland, providing much-needed employment for the women of Achill. These women knitted high-fashion garments, such as smart suits and twin-sets, which were sold to Brown Thomas and Arnotts, Sloweys and Switzer, as well as being exported all over the world.

Achill at that time seemed to attract all the well known ‘movers and shakers’ who were entertained by Miss O’Flaherty. Many of her numerous friends and acquaintances included WB Yeats, Paul Henry, George Moore, Marie Howet, Graham Greene, Heinrich Boll, Constance Markievicz, Douglas Hyde, Padraig and William Pearse, Cardinal Dalton, Paul Henry, George Russell and Dr Kathleen Lynn visited her on Achill and stayed in touch through those years.

She is still fondly remembered in the locality as a tough but fair lady to work for. She kept very much to herself but was obviously well known among her peers. Her life before she came to Achills shores consisted of  being educated in both Mount Anvil and Alexandra Colleges in Dublin, and afterwards pursued a career in millinery, in both London and Paris, before settling in Achill.

Eva died in 1963 and is buried in the O’Flaherty family crypt in the graveyard of Donaghpatrick, Caherlistrane Co.Galway