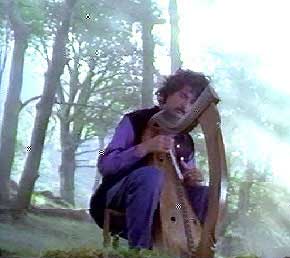 Paul Dooley is one of the leading exponents of the Irish harp in its historical form and style – using a metal-strung harp, playing with the fingernails and damping unwanted string resonance with the fingertips.  He has studied the construction of medieval  Irish harps in Dublin during the early 1980s and has built several harps.  He began his performing career on the harp in 1986 and has since appeared on numerous CD recordings and television programmes.  His repertoire consists mostly of traditional Irish dance music, which for the most part has been learned from players of other traditional instruments – flute, fiddle and pipes.  This music is a real challenge for any type of harp and consequently has not been explored to any great extent on the instrument.  Paul has also spent the past two decades working on the Robert ap Huw manuscript, the oldest collection of harp music in existence.  In the more recent past he has resumed harp making, building a variety of small harps, reproductions of the surviving medieval harps and researching string-making techniques.  As musician in residence Paul will visit all our music classes, share his experiences and influences with the course participants.  He will perform at various events during the week and will also make himself available in the afternoons in Dooagh National School to chat and offer his expert advice to those who would like to meet him.