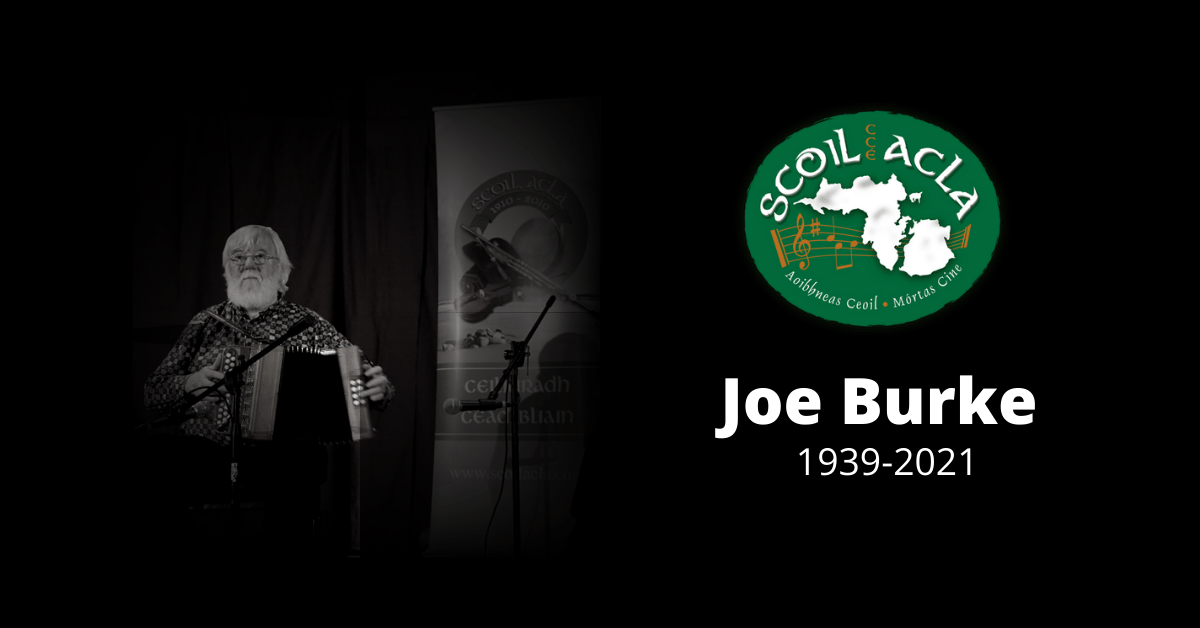 Scoil Acla expresses sadness on the passing of Joe Burke

Scoil Acla CCÉ has expressed sadness on the passing of legendary accordion player Joe Burke in his 82nd year.

Having given his first public performance in November 1955, Joe Burke is widely regarded as one of the greatest exponents of traditional Irish Music.

Hailing from Kilnadeema in East Galway, he is also credited with revival of interest in the accordion as an instrument.

Cian McNamara, Vice-Chairperson of Scoil Acla CCÉ, accordion player and tutor said “He has inspired generations through his musical knowledge, his pride of place and his brilliance as a musician. He will be sorely missed within music circles right across Ireland.”

During his wide-ranging career, Joe Burke travelled all over the word and his recordings have been widely acclaimed. Among the awards he has received are RTÉ’s Traditional Musician of the Year (1970), the AIB Traditional Musician of the Year, the Lifetime Achievement Award from the Irish World (both 1997), an award in Musical Mastery (Boston College, 2000), and Gradam an Chomhaltais (2003). A Joe Burke Tribute Concert was held in Galway in 1997 on his reception of the AIB award.

His solo albums have sold across the globe and many of his early recordings are now considered “Collectors Items”. Over the years he has played with many musical greats including Andy McGann and Felix Dolan, Sean Maguire and Josephine Keegan, Michael Cooney and Terry Corcoran, Charlie Lennon, Frankie Gavin, Kevin Burke, Brian Conway, Noreen O’Donaghue and Mike Rafferty.

Cathaoirleach of Scoil Acla, Sarah Calvey said “we were lucky to have Joe as our Musician in Residence in 2002 and many will have fond memories of his humour and musical ability on his return in 2010 to play at Scoil Acla’s centenary concert.”

“On behalf of Scoil Acla I would like to offer my deepest condolences to his family and friends at this sad time. He leaves behind a fantastic musical legacy that will live on.”